Probably the biggest enemy of distributed systems is NPC, which in this case is an acronym for Network Delay, Process Pause, Clock Drift. Let's look at what the specific NPC issues are.

Cross-database distributed transactions, since they are distributed systems, naturally have NPC problems as well. Since there are no timestamps involved, the nuisance posed is mainly NP.

Let's take TCC distributed transactions as an example to see the impact brought by NP.

Distributed transactions have another class of common problems that need to be dealt with, which is duplicate requests

Because null compensation, suspension, and duplicate requests are all related to NP, we refer to them collectively as the sub-transaction disorder problem. In business processing, these three problems need to be handled carefully, otherwise data inconsistency will appear. 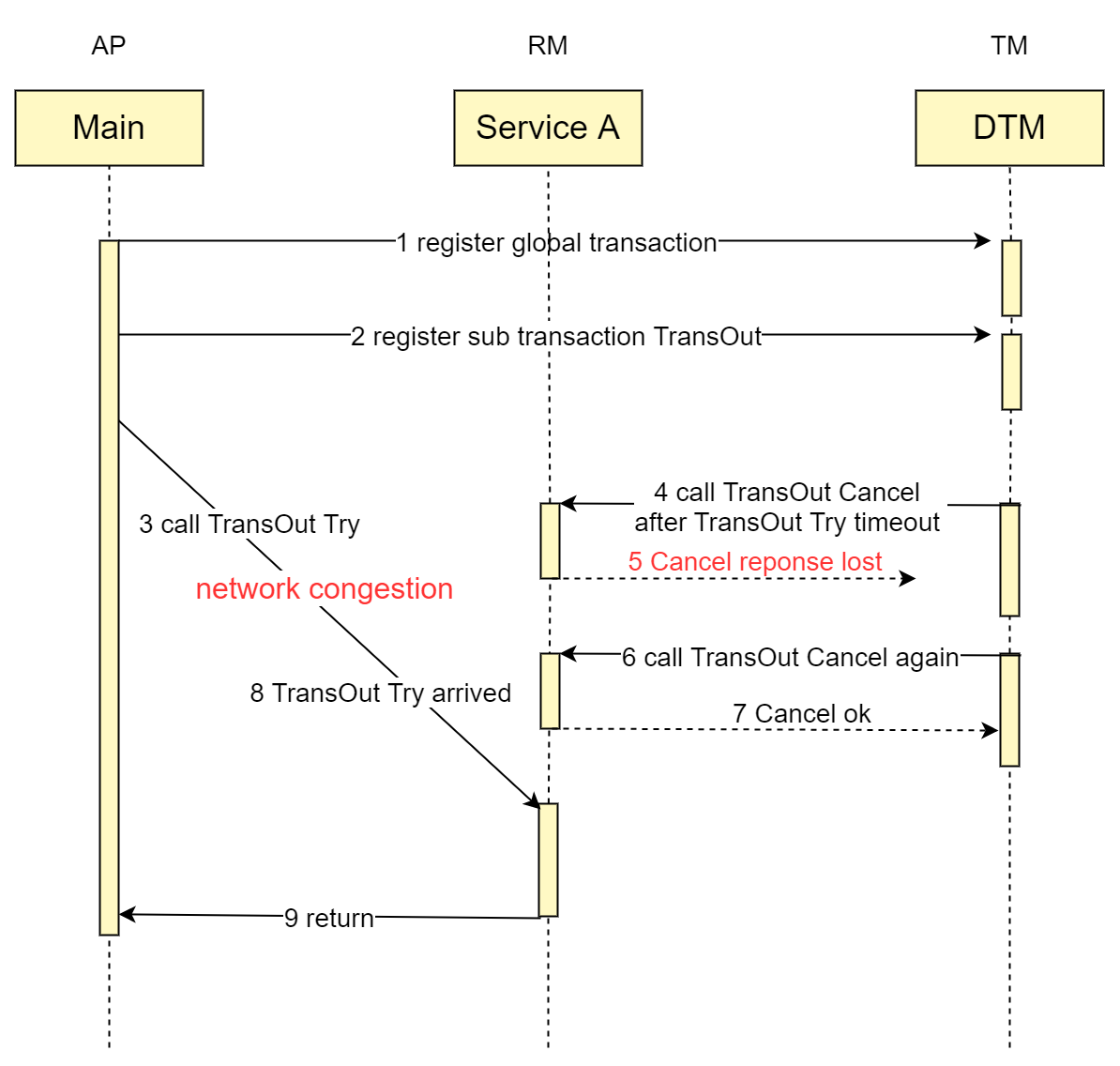 For open source projects other than dtm, including the various cloud vendors, they give most of the business implementation proposals similar to the following.

The above implementation can work normally in most cases, but the above practice of "check first, change later" is easy to fall into the pit in the case of concurrency, let's analyze the following scenario.

In fact, there are many kinds of scenarios of P and C in NPC, and combinations of P and C, which can lead to the above competing situations, so I will not go into them one by one.

Although this scenario is not frequent, in the financial field, once money accounts are involved, then the impact can be huge.

PS: In repeated request handling, "first check then change", is also very easy to have similar problems. The key point to solve this kind of problem is to use "change instead of check" to avoid competing conditions.

We pioneered the sub-transaction barrier technology in dtm. Using this technology, it is very easy to solve exception problems and greatly reduces the threshold of using distributed transactions.

The subtransaction barrier can achieve the following effect, see the figure.

Sub-transaction barriers provide the method BranchBarrier.CallWithDB , the prototype of the method is

Sub-transaction barriers will manage TCC, SAGA, transaction messages, etc., and can also be extended to other areas

The principle of subtransaction barrier technology is to create a branch operation status table dtm_barrier in the local database, with the unique key of gid-branch_id-branch_op

Under this mechanism, solves the problems related to sub-transaction dis-order

For SAGA, two-stage messages, a similar mechanism is used.

Below we detail the sub-transaction barrier in a diagrammatic way. Since the Confirm operation is not involve in null compensation and suspension, so we only focus on Try and Cancel. In diagram, we use A to desinate Try, C to desinate Cancel.

The corresponding idempotent processing part of the subtransaction barrier.

This part is the regular idempotent processing part, inserting a unique key into the database, and if it is a duplicate request, then the insertion fails and a direct success is returned.

The sub-transaction barrier technique is to add only one step to the above idempotent processing part. For operation C, insert ignore a record A. Under normal flow, A is inserted unsuccessfully, and then proceeds to the next step.

When disorder occurs, assuming that C is executed before A, as the following timing diagram shows.

Suppose Try and Cancel are executed concurrently, and both Cancel and Try insert the same record gid-branchid-try. Due to the unique index conflict, only one of the two operations can succeed, while the other one will wait for the transaction holding the lock to complete and return.

The sub-transaction barrier can guarantee the correctness of the final result in various NP cases.

In fact, sub-transaction barriers have a large number of advantages, including:

With sub-transaction barrier support, you can combine Redis, Mongo, and database transactions to form a global transaction. Related usage can be found inside dtm-examples

Theoretically, various stores that support transactions can easily implement subtransaction barriers, such as TiKV, etc. If users have such a need, we will quickly support it.

Barrier provides sql standard interface, but applications usually introduces more advanced orm library instead of bare sql interface. If you want to introduce sub-transaction barriers to you applications together with orm, please see Work with ORM

The subtransaction barrier technique, pioneered by DTM, is significant because

With the help of this sub-transaction barrier technology, developers are completely freed from the handling of NPC.