SAGA transaction mode is the most commonly used mode in DTM, mainly because it is easy to use, less workload, and can solve most of the business needs.

For example, if we want to perform a transaction similar to an interbank transfer, transferring $30 from A to B. Based on the principle of Saga transactions, we take the entire global transaction and split it into the following services.

The logic of a successful SAGA transaction is

If an error occurs in the middle, e.g., an error in the TransIn to B, the compensation operation of the executed branch is invoked, i.e. 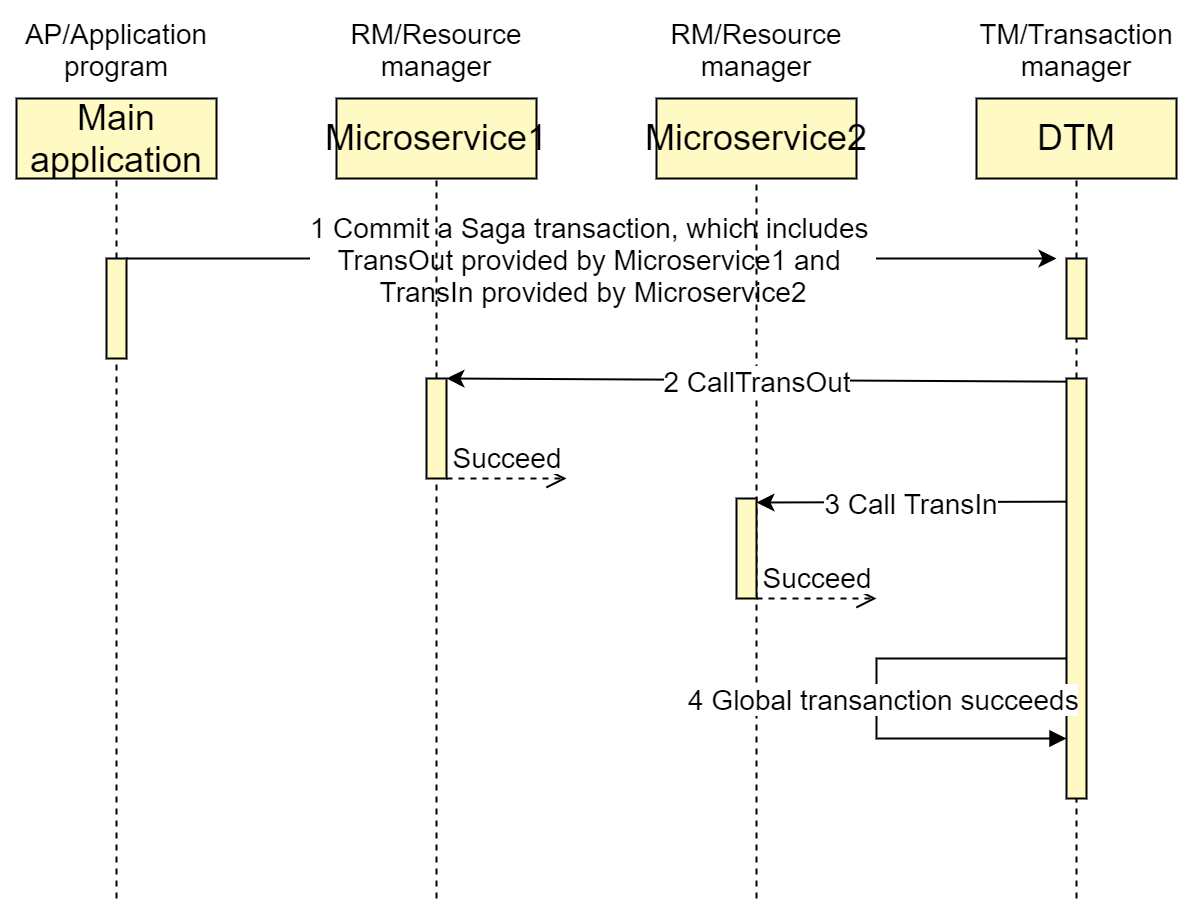 In this diagram, our global transaction initiator, after defining the orchestration information of the entire global transaction, including the forward and reverse compensation operations for each step, submits it to the server, which then executes the previous SAGA logic step by step.

Let's see how to accesses a SAGA transaction

Our previous example is based on HTTP protocol SDK for DTM access, gRPC protocol access is basically the same, detailed example code can be found in dtm-examples

If there is a forward operation failure, such as account balance is insufficient or account is frozen, then dtm will call the compensation operation of each branch to roll back and finally the transaction is rolled back successfully.

Let's call the second branch above, passing the argument to fail

The failed timing diagram is as follows. 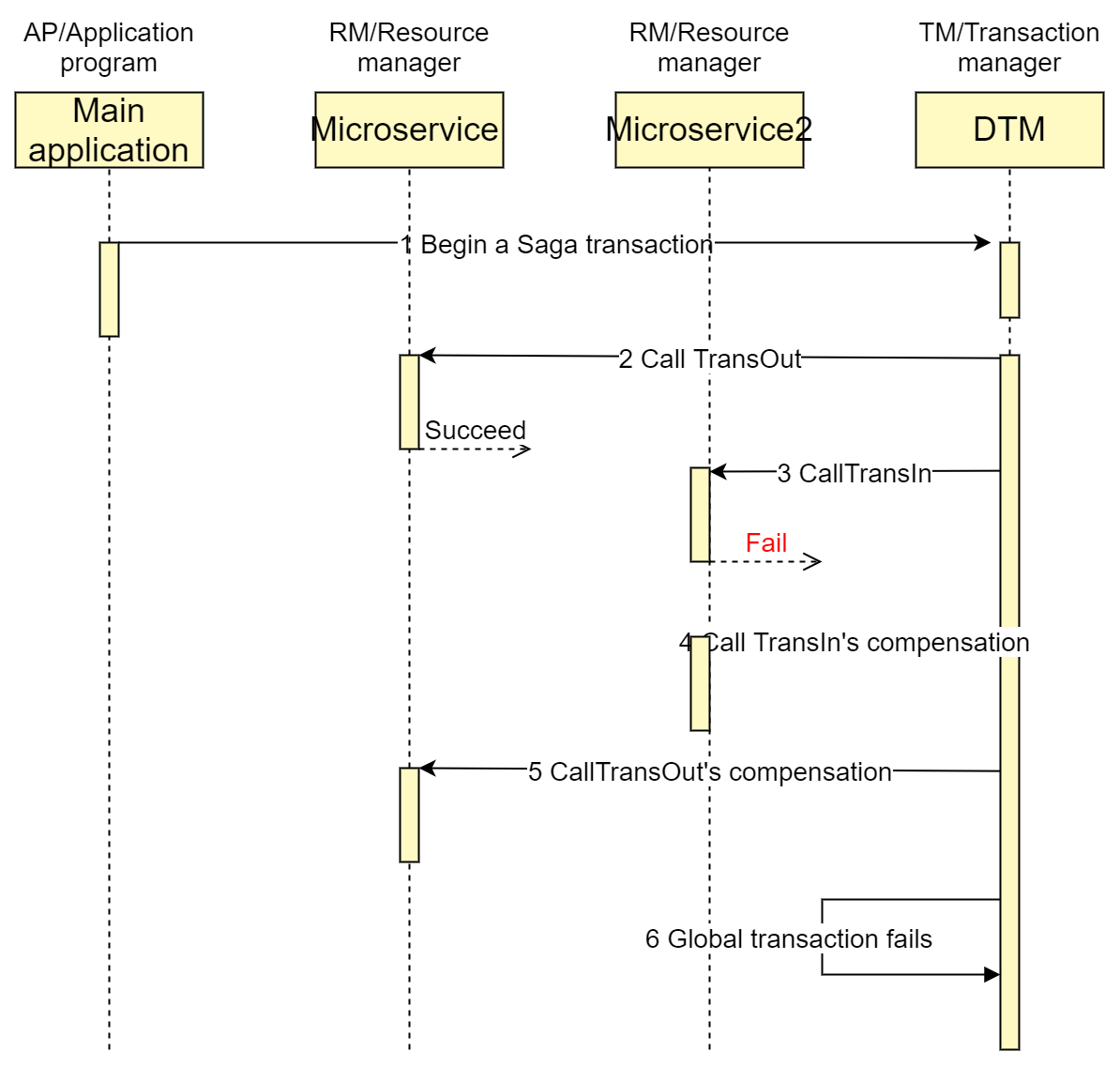 If it is a normal SAGA with no concurrency option turned on, then the compensation branch of the SAGA transaction is compensated in exactly the reverse order of the forward branch.

When SAGA compensates branch A for failure, the forward operation of A may be 1. executed; 2. not executed; and 3. may even be in execution, and result of execution is unknown. Then it is very difficult to properly handle these three cases when compensating for A.

dtm provides subtransaction barrier technology to handle the above three cases automatically, developers only need to write the compensation operation case for 1, the related work is greatly simplified, for detailed principles, see the exception section below.

Does a failed branch operation need to be compensated for?

One often asked questions is whether a failed operation need to compensated for the failure.

In the transactional domain, exceptions are a key consideration, such as downtime failures and process crashes that can lead to inconsistencies. When we are doing distributed transactions, then exceptions in distribution appear more frequently, and the design and handling of exceptions is even more important.

We divide the exceptions into the following categories.

Business failures and exceptions need to be strictly distinguished, for example, the previous insufficient balance is a business failure that must be rolled back, and retries are meaningless. Some operations in distributed transactions require eventual success. For example, a compensation operation in SAGA is one that requires eventual success and will keep retrying until it succeeds as long as it hasn't. For a more detailed discussion of this part, see eventual success

By this point in the introduction, you have enough knowledge to develop and complete a common SAGA task. We will now introduce the more advanced knowledge and usage of SAGA

Let's use a real user case to explain the advanced features of the saga part of dtm.

Problem scenario: A user travel application receives a user travel plan and needs to book a ticket to Sanya, a hotel in Sanya, and a return ticket.

These requirements are the areas where the saga transaction pattern excels, so let's see how dtm solves them.

First of all, we create a saga transaction according to requirement 1, this saga contains three branches, respectively, booking a flight to Sanya, booking a hotel, booking a return flight

Finally, we deal with the problem that the "confirmation may take too much time" in 3 is not an immediate response. Since it is not an immediate response, we cannot make the scheduled operation waiting for the third-party result, but return the status in progress as soon as the scheduled request is submitted. Our branch transaction is not completed, dtm will retry our transaction branch, and we specify the retry interval as 1 minute.

::: Fixed interval retries By default, the retry strategy of dtm is an exponential retreat algorithm, which can avoid too many retries leading to high load in case of failure. But here the booking result should not be retried using exponential retreat algorithm, otherwise the end user will not be notified in time. Therefore, in bookTicket, the result ONGOING is returned, and when dtm receives this result, it will use fixed interval retry, so that the user can be notified in time. :::

In practical applications, we have also met some business scenarios that require some additional skills to handle

Some third-party operations cannot be rolled back #

For example, if an order is shipped, once the shipping instruction is given, then it is difficult to roll back the operation directly if it involves offline related operations. How do you handle a saga that involves this type of situation?

The code in the example, specifying the UnRollback operation in Step 2, 3, must be executed after Step 0, 1 completes.

In addition, if there are two operations that are not rollbackable and may return failure in a global transaction, it may happen that one execution succeed, and one execution failed. In this case the execution of the successful one can not be rolled back, then inconsistency happened.

saga is a long transaction, so it lasts for a large span of time, from 100ms to 1 day, so saga does not have a default timeout.

dtm supports a separate timeout for saga transactions, and when the timeout is reached, the global transaction will be rolled back.

In a saga transaction, you must be careful to set the timeout time. Such transactions cannot contain branches that cannot be rolled back. Because timeout may happen after the execution of some cannot rollback branches.

Results of other branches as input #

The previous design session descibed why dtm does not support such a requirement, so how do you handle it if there are very few actual business needs like this? For example, branch B needs the result of branch A's execution

dtm's suggested approach is to provide another interface in ServiceA so that B can get the relevant data. Although this solution is slightly less efficient, it is easy to understand and maintain, and the development workload is not too big.

PS: There is a small detail to note, you should make network requests outside your transaction to avoid the transaction time becomes longer and lead to concurrency problems.

When I designed the advanced usage of SAGA in DTM, I fully investigated the state machine implementation, and after careful weighing, I decided not to adopt it, mainly for the following reasons.

It may be that within Ali, SAGA is needed to provide similar flexibility as a state machine, but outside Ali, it is particularly rare to see users using Seata's Saga transactions. I researched the development materials for SAGA in Seata, and to get started writing a simple SAGA transaction, you need to

In contrast, DTM's SAGA transaction is very simple and easy to use, there is no cost for developers to understand, usually five or six lines of code to complete the writing of a global transaction, so it has also become the most widely used transaction pattern in DTM. For advanced scenarios, DTM has also been tested in practice to solve complex application scenarios with extremely simple options, such as EnableConcurrent and RetryInterval. Among the user requirements collected so far, we have not seen any case that can be solved by the state function but cannot be solved by DTM's SAGA.

gRPC is a very widely used protocol in the cloud-native era. Seata's state machine, on the other hand, has a good support for HTTP and an unfriendly support for gRPC. The result returned from a gRPC service cannot be parsed without the relevant pb definition file, so it is not possible to use a state machine to make flexible judgments, and then if you want to use a state machine, you must fix the result type, which is more invasive to the application and has a narrower scope of application.

DTM, on the other hand, supports gRPC in a more friendly way, and has no requirements on the result type, which is more widely applicable.

If you have mastered the SAGA transactions in DTM, you can solve most of the problems in distributed transactions.

A detail desciption of SAGA can be found here SAGA